AutoIncorrect is a project that I made to practice using HTML, CSS, and JavaScript without any libraries like jQuery or React. It accepts an input string from the user and generates an output string that includes realistic typos. It models and displays a keyboard on the screen. It uses the keyboard model to create realistic typos based on the homerow keys, the error frequency and severity settings entered by the user, and the relative position and distance of keys from each other in the keyboard model. To give the feeling of working on an old computer it also animates through the input string, highlights keys on the keyboard display and shows a cursor highlight in both the input and output fields. And it uses the browser AudioContext to make beeping sounds.

AutoIncorrect has one HTML file, index.html, one CSS file, style.CSS, and many javascript files that are contained in the folder called modules.

The index.html file is pretty simple. The keyboard buttons for the keyboard display are added using JavaScript, so the HTML is just responsible for the basic layout.

Use the ‘Roboto’ font from Google.

Gets the stylesheet for autoIncorrect.

The current input and outpouts are displayed here.

The keyboard div will be filled up with keys generated from the model.

User types their input text into the textarea.

The ‘backdrop’ div floats behind the input text. We put a mark element inside the backdrop to make it appear as though the text in the input textarea is highlighted.

Import the JavaScript for autoIncorrect.

The css file uses the outset border to makes the keyboard keys look 3d. It sets the colors, including bright green for highlighting the current input and red to show when a typo has been made. It also has the custom styling for the slider and checkbox elements.

max-height is calculated using calc, the CSS calculation function. lh is a variable equal to the height of one line of text.

transition defines the animation to be used on a given property. This tells the CSS processor to animate transitions when max-height changes with the ‘ease-out’ animation. 1s makes the animation happen over 1 second.

When the comment is hovered, max-height becomes 100vh, or 100% of the viewport-height. In other words, the limit on the comment height changes from 3 lines of text to the full height of the window. This is used on desktop. Some mobile devices can do a hover input, but it is not convenient, consistent, or intuitive.

setup.js is imported into index.html as a module so that it can import javascript from the other files in the modules folder. Setup does the following:

Getting the references during setup means we can just pass the display object instead of finding the objects on the page again when they need to be manipulated.

The onscreen display is made using a model in the form of an array of arrays of objects that contain an uppercase value and a lowercase value. The typos are also generated by looking at the relationship of keys inside this model.

The settings div is where the user can change the settings. This is what it looks like: 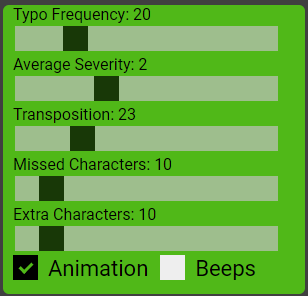 How the Typos Work

First, the program generates a model of a keyboard from strings that represent the uppercase and lowercase characters in each row. The model is an array of arrays, with each array representing a row of uppercase and lowercase characters. This model is used to generate the display and to generate typos by finding keys that are near the target key or on the path from the target key to the closest key in the homerow. There are functions for finding a specific key on the keyboard, finding the keys on the path from one key to another, and finding keys that are near to a key.

There is also an array of offset values that determine how many key-widths the start of a row is offset from the left side. The offset values are used in both the display and when calculating the distance between keys.

The Settings box contains inputs for each of the settings: frequency, severity, transposition, missedCharacters, and extraCharacters. The Settings box also lets the user turn animation and sound on or off.

For each character in the input string, we first see if it is present in the keyboard model. The model just has the upper and lower case keys from my laptop keyboard, so it is possible that the user will enter a key that isn’t in the model. If it isn’t in the model string then we add the character to the output array without making a typo.

Use the Settings to Decide if a Typo has Been Made

If the user doesn’t have animation turned on, then the result array is reduced to an output string and put into the output container on the screen.

If sound is turned on the web browser audioContext will be used to make a beeping noise for each input character. The tone of the beep corresponds to the row on the keyboard. If a typo is made then the tone changes to indicate a typo.

Generating random numbers is an important part of deciding whether to make a typo for any given input character. Random numbers are also used to select the character that results from the typo. Here is the getRandomInt function. It can generate random integers between any requested values. By default it will generate a number between and including 1-100. getRandomInt is used throughout the program wherever we need a random integer.

Math.ceil rounds a number up to the nearest integer.

Math.floor rounds a number down to the nearest integer.

Math.random generates a decimal between 0 and 1. Multiply it by the result of max - min + 1. Then add min to the result to ensure that the minimum result is equal to the requested minimum value.

severityWeightedRandomNumber is another random number generating function. It will generate a random number inside the requested range, but is designed to be more likely to generate a lower number.

Severity is a setting that the user can change. Severity makes the typos worse by making it more likely to pick keys that are farther away from the intended key on the keyboard. Increasing the value of severity will make severityWeightedRandomNumber more likely to pick a higher number.

The keyboard navigation functions include

Getting the Index of a Character on the Keyboard

Finding the Distance from One Key to Another

Finding the distance from one key to another is an important part of simulating the most likely typographical errors. The distanceFrom function accepts two indexes and the keyboardModel object. If the optional argument returnPath is true then the array of keys on the path from index1 to index2 will be returned in addition to the distance.

We’ll increment the distance every time we move. Once we reach the upper index, we have determined the distance and are ready to return a result.

An interesting part of solving this problem is how to deal with the offsets. Each row of keys is offset from the left side of the keyboard by some amount. The offsets in the model are the same as on my laptop keyboard. This is what the model looks like on the screen:

The offsets make some keys inaccessible by a diagonal move. Consider the diagonal move from ‘s’ to ‘c’. Row 2, column 2 is ‘s’. Row 3, column 3 is ‘c’. Without the offsets, you could make a single diagonal move up one row and over one column to move from ‘c’ to ‘s’. But if you look at the keyboard above, ‘s’ is not adjacent to ‘c’. The way we account for that in the model is whenever

Generating a mistake calls the typo function. The typo function makes use of the functions discussed above, distanceFrom, getClosestHomeRow, getIndexOfCharacter, and getKeysAround. It also uses the getMistakeCharacter function.

The getMistakeCharacter function uses the arrays of possible mistake keys, the settings, and the severityWeightedRandomInt function to choose the mistake character.

If the user has animations turned on, then the output characters will be displayed one at a time as the cursor moves through the input and output boxes.

Using setTimeout and recursion to iterate through the results array

The animationLoop function uses setTimeout and calls itself recursively to iterate through the results array generated by getResults. It calls displayOutputAtIndex to do the work of displaying the output on the page.

displayOutputAtIndex makes all the changes visible on the page. It displays the current input and current output in the big fields at the top of the screen. It calls advanceOutputCursor to take care of cursor animation.

Call highlightInputAt to make the cursor appear in the input field.

Call advanceOutputCursor to make the cursor appear in the next space in the output field.

The displayOutputAtIndex function plays a tone that is higher or lower depending on what keyboard row the output character is located in.

This was a fun project. I learned a lot about working with JavaScript without using advance frameworks.