I have been using React Context to manage state for my React projects for a while now. The heart of React Context’s state management is the reducer, the function that processes actions and returns the new state object. I had been using a switch statement to make the reducer function work. But I found that with a switch statement the files for more complex Contexts were getting too big. The switch statement got bigger and bigger as I added cases to handle all my actions, and my test file for the Context component also got big. So for my latest project I decided to use Redux Toolkit’s createReducer function.

When you use createReducer to make your context reducer function 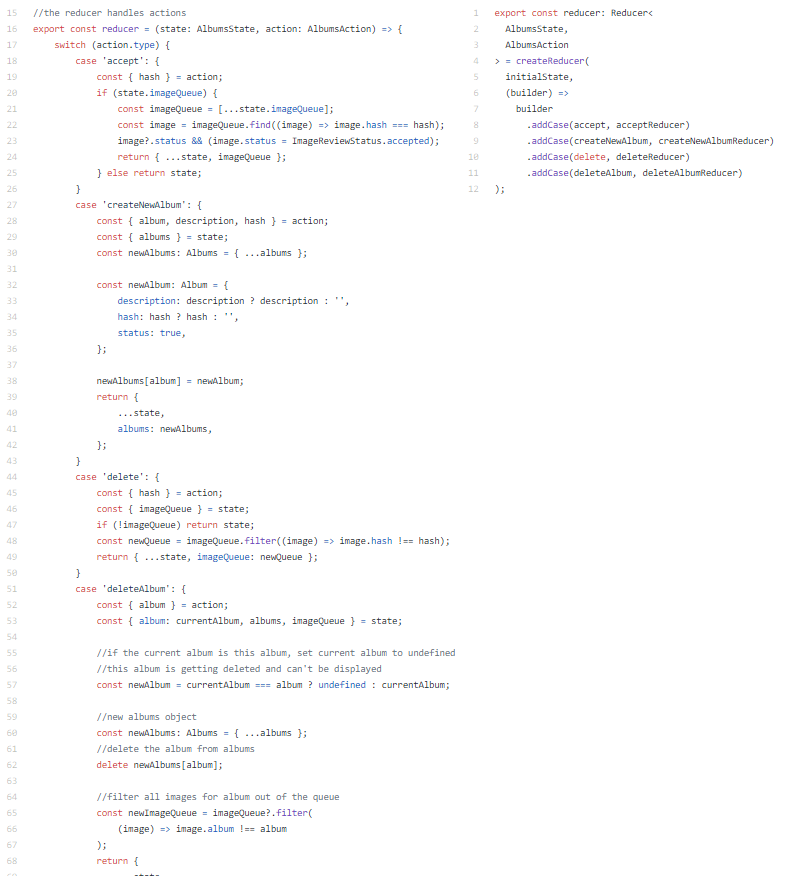 I created an example app (linked here) that uses React Context to display pages with lists of questions.

To use createReducer and createAction you need to install Redux Toolkit.

The type of the state object that your context manages.

The type of the action object that your context accepts.

Each call to addCase adds a case reducer to handle a single action type. The first argument is normally a string. But when you use createAction to make your action creators, you can use a reference to the action creator instead of a string. The action creators used here (addPage, deletePage, setCurrentPage) are exported from the action files.

Each Action is Self Contained in its Own File

Action with no payload:

The reducer function will get called with (state, action). But this reducer doesn’t use the action object, so we can leave it out.

Redux Toolkit’s createReducer function uses the Immer library. Immer lets you use simplified reducers. Write code that mutates the state directly and createReducer will use Immer to make sure that a new state object is return. Your code is shorter and it gets rid of the chance to make mistakes when creating your nested state return object.

Action with primitive payload. This one uses a number.

Define the type of the payload.

The reducer is called with (state, action). Use object destructuring to get the payload out of the action.

Action with an object payload:

Import the payload interface declaration. You could also declare it inside the action file.

Typing the payload in the action type declaration.

Use object destructuring to get the payload out of the action. The payload will match the interface because calls to the action creator are properly typed throughout the code.

You use the actions by calling the action creator with and then dispatching it.

Dispatching action with no payload:

Dispatching action with an object payload:

Remember: If you choose to write reducers that mutate state directly, you don’t get a return value from them. You should assert that the state object that you passed in has mutated.

The reducer mutates the newState object because we aren’t using the Immer library in the testing environment. When this reducer is called by the main reducer made using the createReducer function, Immer will be used. So instead of mutating state a new state object will be generated and returned.

Assert that the state object was mutated.

That’s all you need to get started using createReducer and createAction with React Context. I think it’s a really useful tool that simplifies and shortens the code, prevents mistakes, and makes testing easier.