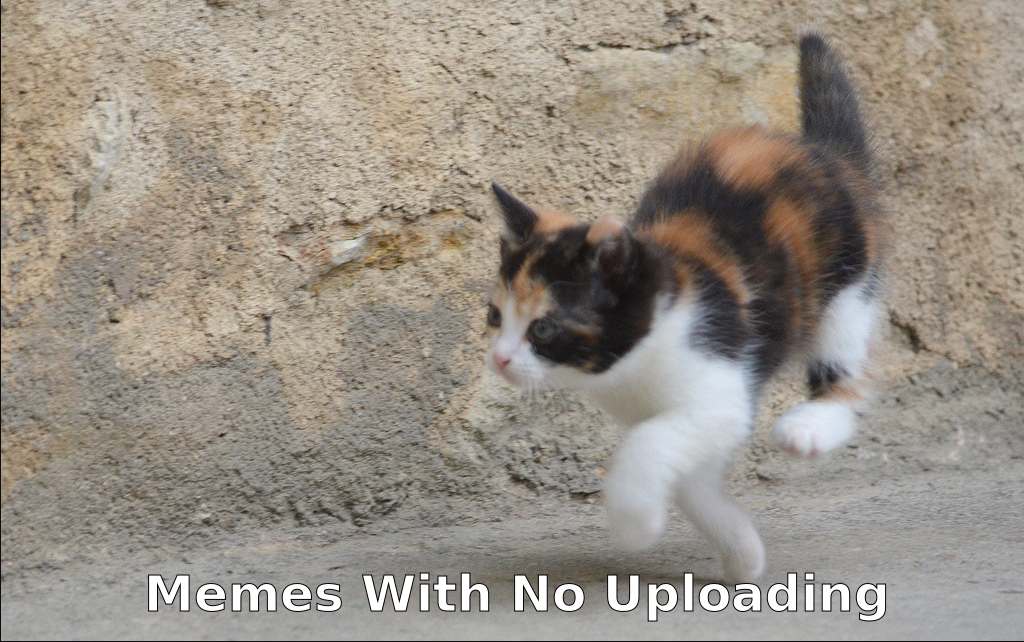 We are going to make a web server that will let users create memes without uploading anything.

First, we’ll make a route on the server that will generate an image containing the requested path as text eg. server/text/hello world will return a jpg that contains the text “hello world”

Then we’ll make another route that takes both text and a hosted image address and makes a meme.

We’ll use JavaScript, express, and node-canvas to make the code work. We’ll use GitHub and Heroku to put it online.

You’ll need to have node and npm installed. The code uses some newer features of node, so make sure you have node v.14.3 or higher.

You should also have nodemon installed. Nodemon lets you run your code and refreshes it every time you save changes. You can skip installing nodemon and just use node instead, but you’ll have to manually restart your code.

Make a new folder. Name it whatever you want. I named my folder memeMaker. In your new folder, run npm init -y to initialize the project.

Install express. express will let us make a web server. A web server accepts requests from web browsers and sends data back. The web server will let users request memes, run the code to create the memes, and send the meme files as a response to the request.

Install node-canvas. node-canvas is a version of the HTML canvas API that runs in node instead of in the browser. The canvas API lets you use JavaScript to create and change images and text. We’ll start by using canvas to make a .jpg that contains text. Then later we’ll write the code that loads an image into the canvas before drawing text on top of it.

Ok, now we are ready to write some code. Create a new file named index.js. Write this code in it.

You should see this:

Now you can reach your server by going to http://localhost:8081/

Use Canvas to Make an Image From Text

Ok, now let’s write the function that creates an image from an input string.

Put this code in at the top of the index.js file.

The Canvas API is what lets you use JavaScript to manipulate images.

The 2d canvas context is the part of the canvas API where you load text.

This string tells canvas what font settings to use. Once you have it working try changing the font, style, and the size.

We need to measure the text and make the canvas wider than the text. If we don’t, then the text will get cut off because it is bigger than the canvas it is getting drawn on.

Drawing the meme text in white with a black outline takes more than one step. The first step is to use the Context FillText function to draw the text.

The second step for the meme text is to use the Context StrokeText function to draw the outline in black.

We want binary data to send to the browser. Just sending the whole canvas object won’t work. The Node Buffer is binary data. The Node Canvas .toBuffer function will return the canvas as a buffer.

Make a Route to Return a Text Image

Put this code in right under where you declare const port = 8081;

’:’ is the way to put a variable in the parameters of an express route. We named this variable ‘input’, so the route path /text is followed by :input

Optional Chaining lets you easily access nested properties of objects without causing an error if something returns undefined. Here we use it to get the input from the params property of the request object.

The headers are where the web server tells the browser what sort of response to expect. Res.writeHead lets us specify our response headers.

Res.end is where we finish writing the response and send the data to the web browser.

If you still have your server running, nodemon should have refreshed it when you saved the changes to your code.

If not, start it again by running

Make a Meme: Put Text on an Image

Get the loadImage function from the canvas library.

Put the makeMeme function under the makeTextImage function but above the routes. If you need to see where, look at the complete index.js on GitHub: https://github.com/jacobwicks/memeMaker/blob/master/index.js

Async lets us call another function and wait for it to return a value. We use it to wait for the image to load.

Await lets call wait for the return value of a function. We use it to wait for the image to load. The image loading is asynchronous because it has to call another server to load the image.

The drawImage function is how you put an image onto the canvas. We put the image on first then draw the text on top of it.

Add a Route That Returns a Meme

Add this route right under where you declare const port = 8081; 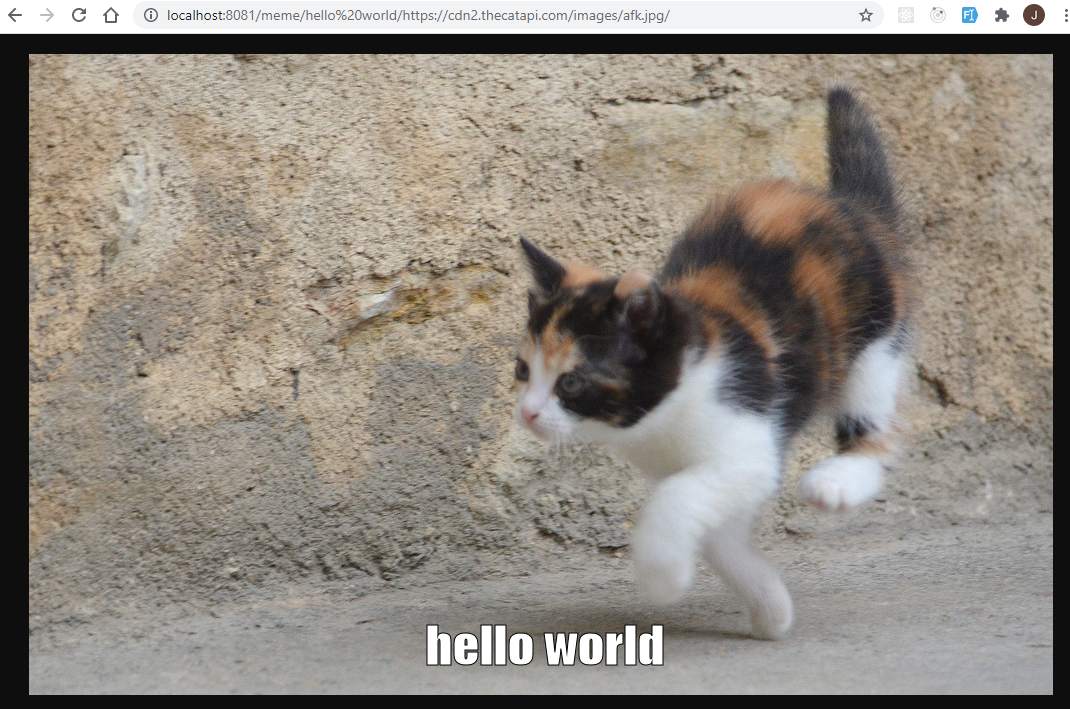 You need to make some changes to your files before you can host them online. You need to

When your app is running online, it won’t be using port 8081. It will use whatever port the server assigns to it. The server will make the assigned port available in the environment variable PORT. You can access this at process.env.PORT.

Here’s an example of how your package.json should look when you are done.

Your package.json file has a property scripts that looks something like this:

Add a new property to package.json called engines. This tells Heroku to use node 14.7. The code we wrote earlier uses features that were recently added to node. If you don’t add this line then your app will crash when Heroku tries to run it using an older version of node.

Put this in your .gitignore file.

That’s it for the .gitignore!

If you don’t have a GitHub account, make one here: [https://github.com/join] Make a new repository. You can name it whatever you want. I suggest memeMaker. Don’t initialize the new repository with a readme. 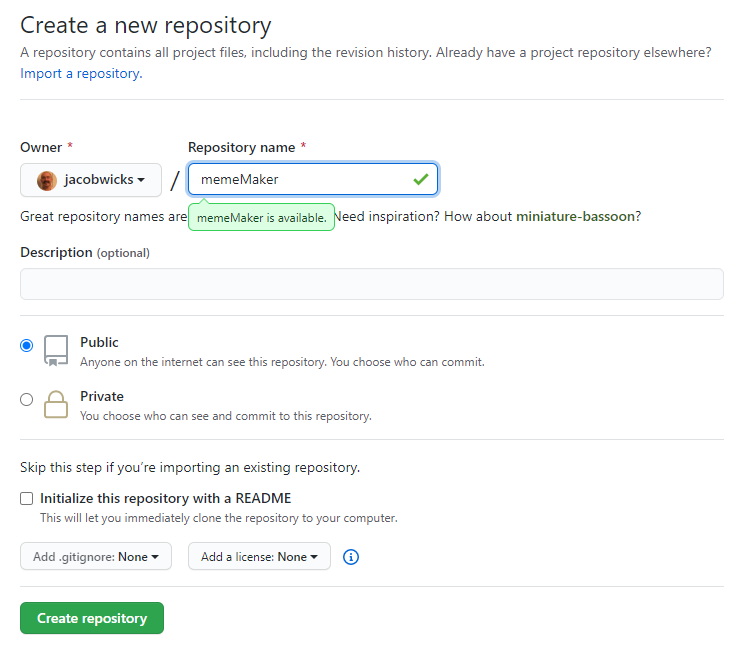 Click Create Repository. Then you will see this screen:

Copy the git url from this screen. The git url for my repo is https://github.com/jacobwicks/memeMaker.git. Yours will be different because you have a different GitHub username.

Add Your Code to your new Repository

Using the command line, go to the folder where you have index.js.

Add all the files. This step is where .gitignore stops the Node Modules from being added!

This step is the most complicated step. You tell git to add a remote origin of your repository’s url.

My git url was https://github.com/jacobwicks/memeMaker.git. That’s because my git username is jacobwicks and my repository was named memeMaker.

Yours will look different because your username is different than mine.

Finally, push your code to your git repository.

Now check your repository on GitHub. You should see all the files you just wrote. 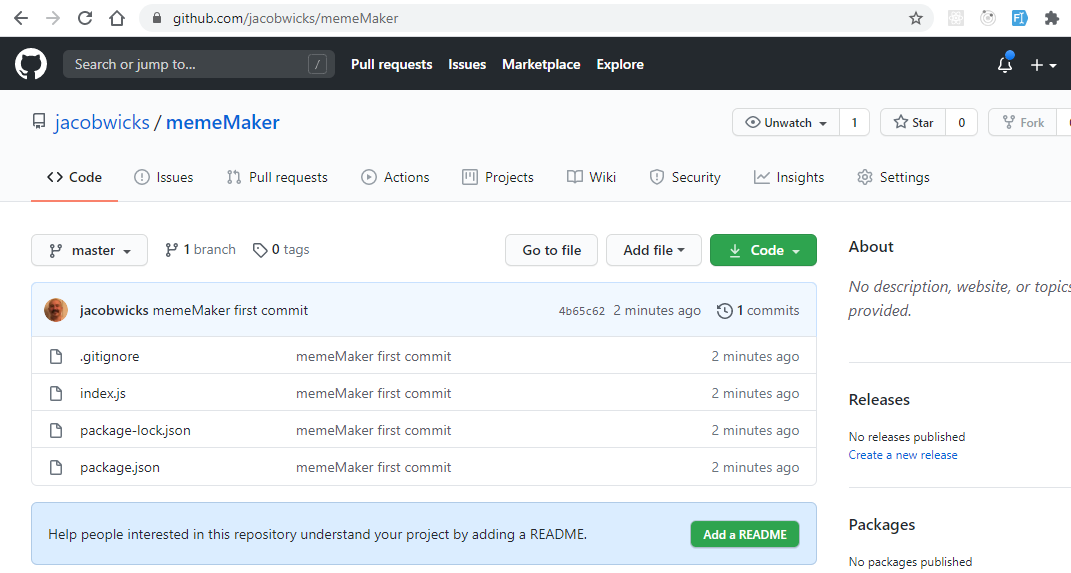 Great. Now we are ready to get your app running online!

One site that lets you host an express web server is Heroku.

To host on Heroku you will:

Go to the Heroku dashboard. Start creating a new app by clicking the ‘New’ button then clicking ‘create new app’ in the dropdown menu.

Create a new app. You can name it whatever you want. I named mine my-meme-maker. You can take whatever name is available. 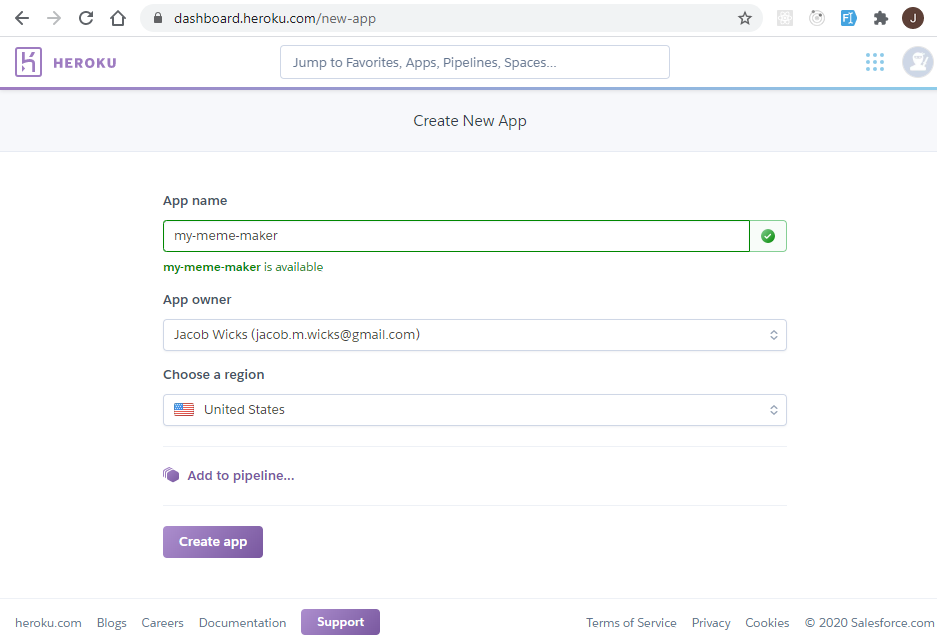 Deploy by Connecting the App to GitHub

Under the deployment method, Click the ‘Connect to GitHub’ button.

If this is your first time working with Heroku, you need to connect your GitHub account to Heroku.

Click the ‘Connect to GitHub’ button. This may connect your github account automatically, or there may be some more steps.

After your github account is connected you will be able to search for your repo. Type the name of your repo in the search field and click the search button. My repo was named ‘memeMaker’. After the search completes, your repo will be shown below. Click the connect button.

Now your Heroku App is connected to your GitHub repo! 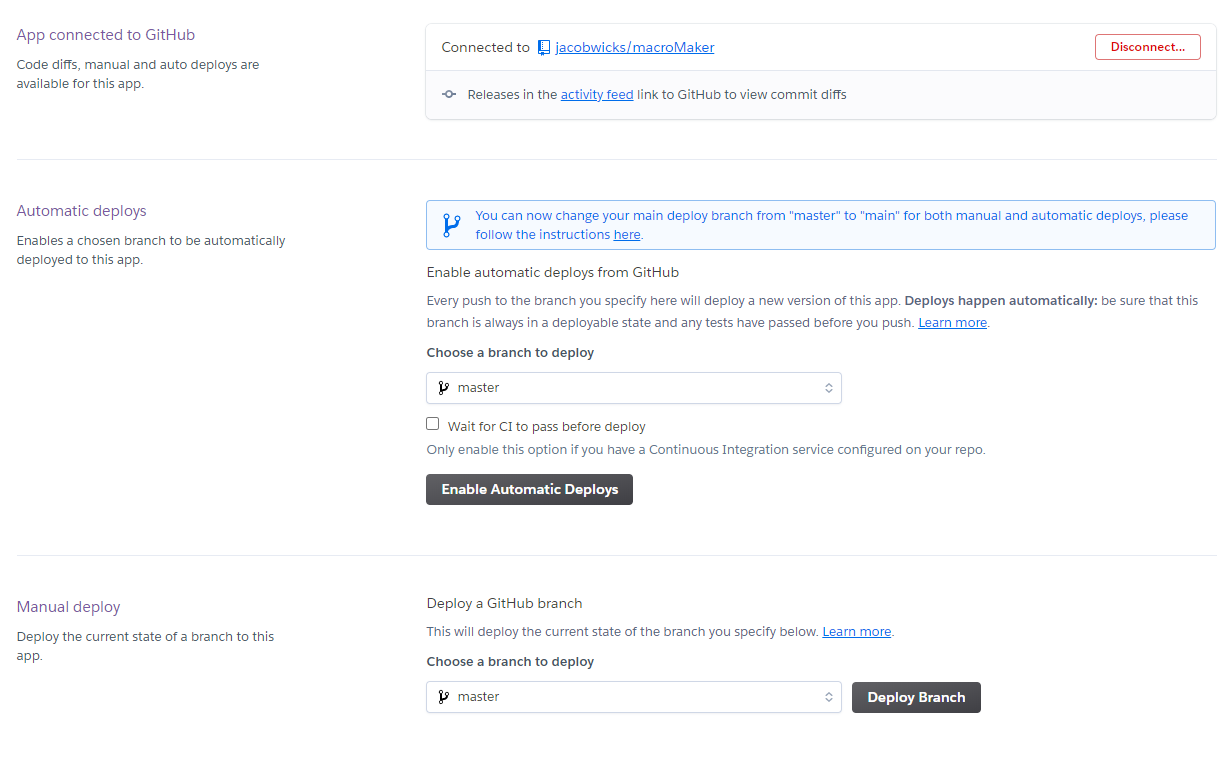 Click the ‘deploy branch’ button in the Manual Deploy section.

It should say “Your app was successfully deployed” 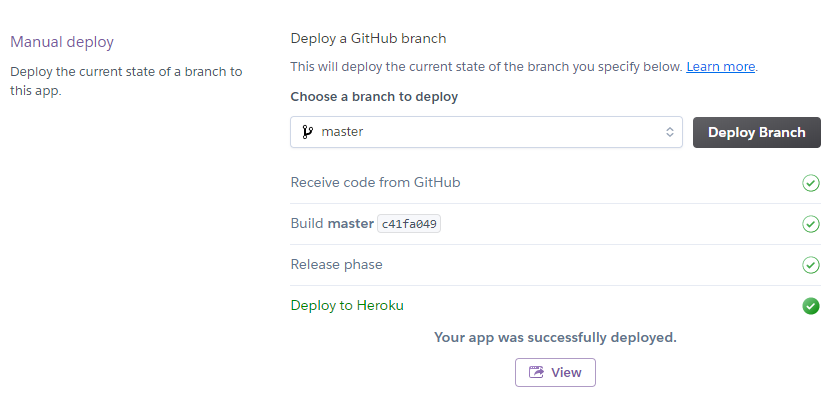 Click the view button and you’ll see your ‘/’ route working.

Now you can make memes that say whatever you want! 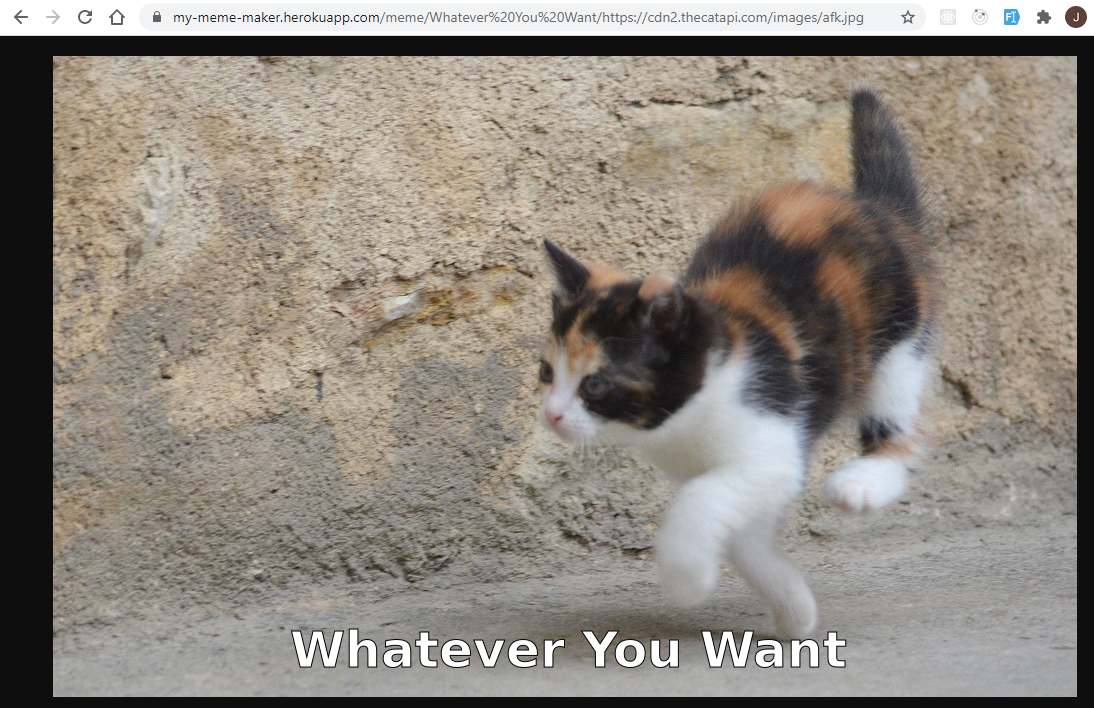