When I write a blog post about my code, I want to write information that is detailed enough that beginners won’t get lost. Because a single line or block of code can include many different operations, it can be difficult to present the whole function, the specific code you are talking about, and the explanation for what the code is doing all in a clearly visually connected way. So I decided to make it possible to float comment boxes next to specific lines of code. That way the explanation is clearly visually connected to the code that is being explained. This helps the reader keep the ideas connected, while saving vertical screen space.

Here’s a block of code with line numbers and a comment pointing to line 7:

Excellent, right? Want to know how it works?

When the user writes a Jekyll post, they can use Liquid Tags to highlight their code blocks. If they want to, they can tell Jekyll to add line numbers to the code block.

Finally, we use JavaScript to listen for the page resize event. When the page resizes, we run the code to position each comment again. That way the comments will stay in the correct position if the user resizes the page.

The explanations on this page go over the important code. But it doesn’t cover everything. The complete source code can be found at the links below.

That will render on the page as this:

To add line numbers, you add ‘linenos’ to the opening tag:

That will render on the page as this:

If you inspect the page, you can see the line numbers sitting inside of a <pre> element. You can inspect the page using your browser’s console, or on some browsers there is an ‘inspect element’ item in the right click menu. 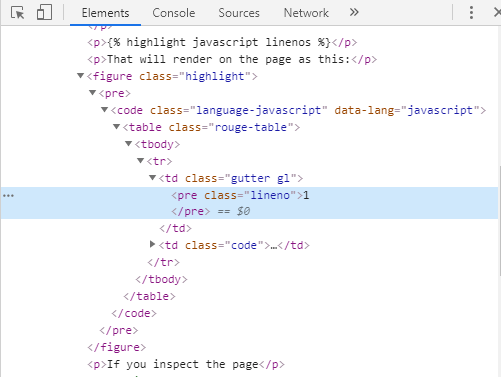 And here’s what it would look like if we had 9 lines of code instead of just 1:

These line numbers are what we want the comment boxes to line up with.

We use JavaScript and CSS to create the comment boxes. First let’s look at the JavaScript. After that, I’ll explain how the CSS works. Then I will tell you how to add it to your Jekyll site.

This code finds each element that has the ‘lineno’ class. Then it adds a div with an id to each line number inside each ‘lineno’ element.

Use getElementsByClassName to find each element with the class ‘lineno.’

Weirdly, getElementsByClassName does not return a JavaScript array. It returns an ‘array-like’ item. But the return value does not have any of the JavaScript Array methods available.

We want to use the Array methods, so use the spread operator and a pair of brackets to turn the result into an actual Array.

The innerHTML of the codeBlock element is a string with all the line numbers and newline characters.

Use String.split to turn the string into an array, with one element for each line number.

Use Array.map to make a new array out of the array of line numbers.

This function will return a valid HTML string with a div in it. The content of the div will be a line number. The div will have an id in the format of “block.1.line.7”. We’ll use the HTML api method getElementById to find the div later, if a comment has been attached to it.

Use Array.join to make the array of strings that we created on line 9 into one single string.

Once we set the innerHTML of the codeBlock element, it will be full of divs with ids that we can search for when we need to find lines of code.

Now the line numbers element will look like this: 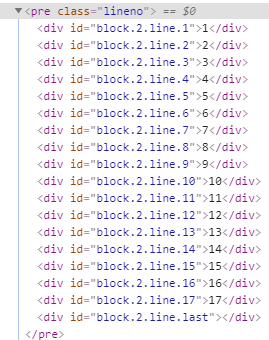 Each line number can be found by using document.getElementById. Once we have found a div, we can find its position on the page.

Jekyll posts may contain HTML tags. They will render on the page normally. To write a lineComment the user has to write a div, assign the div the class “lineComment”, and give the div an id. The id will contain the block number and the line number, separated by periods. We’ll use JavaScript to find lineComments, and split the id property to find the assigned block number and line number.

HTML in Jekyll may contain markdown. To tell Jekyll to parse markdown inside HTML elements, add the following lines to the _config.yml file:

In a default Jekyll setup, the _config.yml file is in the root directory of the Jekyll site.

Find Each Code BLock That Has Line Numbers

document.getElementsByClassName finds all elements on the page with the given class name. It returns an ‘array-like’ object. You can find elements in the array-like object by index, but the JavaScript Array methods are not available on it.

Use the spread operator … inside of a pair of angle brackets to make the array-like object into a JavaScript array.

Now we have the array codeBlocks that contains a reference to the ‘lineno’ element from each code block with line numbers. Inside those elements are the divs with line numbers that we created earlier.

comments is an array that contains all the lineComments in the post. We’ll filter the comments array to find all the comments assigned to a particular code block.

For Every Code Block, Find All the Assigned Comments

highestLineNumber is the number inside the last line number div. We can use it to determine if a comment assigned to this block has been given an invalid line number.

Use Array.filter to return an array with only the comments assigned to this code block.

All of this code is inside of a call to codeBlocks.forEach, which is where we assign the value of the blockIndex variable.

The invalidCommentAssignment function takes a function, adds a label with the assigned block and line numbers, and gives it a css class that turns it bright red. That way the user can see that they have assigned the comment an invalid block and/or line number.

We have the array blockComments that contains every comment assigned to this block. This code puts each comment in the correct position.

The getLineNumber function takes a comment and returns the lineNumber from the comment’s id property.

The getOffsetTop function finds how far the element is from the top of the page. The code for getOffsetTop is shown below.

commentWidth is calculated earlier based on the width of the wrapper element created by Jekyll. commentWidth will be reduced if the screen is very narrow.

To line the comments up with a div, we need to know where the top of that div is. Here’s the function that takes an element and returns the top offset, which is how far in pixels the top of the element is from the top page. Because the offsetTop property of each element tells us what its top offset is relative to the parent of that element, we have to add the offset of all the parent elements together to get the correct number. Use a while loop to loop to go through each parent of the element.

+= is the addition assignment operator. Adds to a variable and assigns the result as the new value.

The HTMLElement.offsetParent property of an element returns a reference to the nearest parent element.

There’s a similar function that finds the leftOffset, which is how far from the left side of the screen an element is. You can see that function in the full source code.

Adding Classes to Style the lineComment

This code adds a label and some styling to the content of the lineComment. This code will only run when the page loads, because positionAllComments will be called with a falsy value for reposition. When the page is resized, reposition will be truthy and this code will not be executed again.

The addLabelToContent function takes a content string and inserts a <span> element with the label string into it.

The classes applied to the content will affect how many lines it takes up on the screen when the comment is collapsed.

Use a template literal to create a div with the class line_comment_container. Put the labeled content inside it.

We use CSS to accomplish several things. We use CSS to set the background color of the comment, create the shaft and head of the arrow pointing the line number, and collapse and expand the comments when the user hovers over them.

This article on CSS-Tricks.com explains the different ways of using CSS to animate changes in the height of an element where the height is automatically determined based on the size of the element’s content. Each method has some benefits and some drawbacks. I chose to use max-height because it works well enough for this application and involves very few lines of code.

Here we declare a CSS variable lh. By declaring lh as a CSS variable, we can refer back to it throughout the CSS. We can use lh in calculations.

lh is equal to 1.4 rem. The CSS unit rem is the font size of the root element of the document. This basically means it’s how tall in pixels the font characters will be. Multiplying rem by 1.4 gives us a height value that accounds for one character in height plus white space above and below it.

We’ll use lh later to set the collapsed height of the comments to either 3 lines or 1 line, depending on if there are other comments close by.

Setting each of the border properties forms a rectangle.

The body of the arrow is placed 20 pixels back from the right side of the comment.

Setting the border-top to white makes the separation between comments visible when they overlap. Overlap will occur if there is a comment on the line after another comment.

The CSS calc() function lets you perform calculations inside CSS property values. max-height is set to three times the value of the lh variable, or 3 lines of text plus whitespace.

The transition property allows you to control how an element will change appearance when a property of the element changes. This line says that when the max-height property changes, it should take 1 second to change, and ease-out is an animation that starts slow and ends slow, moving faster in the middle.

Setting border-left to gray and border-top and border-bottom to transparent creates a triangle pointing right.

The head of the arrow is position to the right of the line_comment_container.

When the user hovers the mouse over a comment, comment expands to the height of its content, the background gets lighter, and the arrow turns green.

Setting the z-index puts the hovered comment on top of any other comments it may overlap.

To make lineComments work on your Jekyll Blog, you need to do 4 things.

Tell Jekyll to Parse Markdown Inside of HTML Elements

add the following lines to the _config.yml file:

If you don’t already have a folder named assets in the root folder of your Jekyll Blog, then create one.

Create a folder named lineComments inside the assets folder.

Put lineComments.html into the _includes Folder of the Jekyll Blog

If you don’t already have a folder named _includes in the root folder of your Jekyll Blog, then create one. Jekyll includes let you use Liquid Tags to include contents from a file in the _includes folder.

Add this line to the bottom of any post that you want to use lineComments in. It has to be at the bottom of the post so that the JavaScript runs after the comment divs are rendered to the page.

Now You Can Use lineComments in Your Jekyll Blog

To write a lineComment you need to put the comment inside of a div. Assign the div the class “lineComment”. Give the div an id in the correct form. The correct id form is “block.#.line.#” where the # symbols are the desired block number and line number.